skip to main | skip to sidebar

What better way to celebrate DA!'s 7th birthday than with a wallpaper from my favorite series? ...I liked the pose of Kino and the more pop-art American comicbook styling of the image, and started to trace it, but never got very far with it. Recently I decided to finish it once and for all...[more] 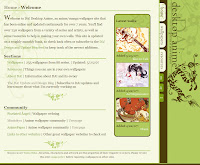 It's official: DA! Desktop Anime is now 7 years old. That's a scary thought. I mean, this website's old enough to hit the second grade! How many websites run by a single person on their spare time do you know of that's been updated monthly for seven years?
This site is older than Wikipedia. It's even older, by a few months, than that other "DA" site, DeviantArt.
What a wild ride it's been. When I started this site I had just begun my first year of undergrad. Netscape was a cool browser. We had just learned there was something called "CSS" that was supposed to get rid of those <font> tags for once and for all. I really, really liked Fushigi Yuugi and Pretear.
Now, I've got my Master's degree and a lovely job at Google, Netscape has disappeared almost entirely into a footnote in history of the Mozilla project. New buzzwords like AJAX and RSS are making the rounds. I have almost completely stopped watching any anime series, except for a rare few (Nodame Cantabile and Mushishi, namely.)
But don't start getting up! The captain has NOT turned off the seatbelt sign. I don't plan on stopping any time soon, so you'd better hang on because I'm toasting to another seven years of hearty wallpaper goodness.
Because some time ago (it's been long enough that I stopped counting the time gone by) I made it a tradition to grace DA! with a new layout once a year on its birthday. So here you go. Enjoy the Zen goodness of version 9, which includes a lot more ways of finding wallpapers. I dumped the ratings, which never felt like they were doing anything for the site, and added links to the wallpapers on Minitokyo and AnimePaper. I also added all the widescreen versions of walls I made this past year. Because dammit, widescreen is wiiiiiiiiide. And very, very good.

And not in a scheduled maintenance sort of way either.
Server admin thinks it should be back up Wednesday noonish PDT.
Posted by Ming-Ling @ 9:26 PM No comments:

This is the design blog for DA! Desktop Anime, an anime and manga wallpaper site. Here you'll find both detailed updates to the site as well as notes on wallpapers I'm currently working on and ramblings on wallpaper designing in general.